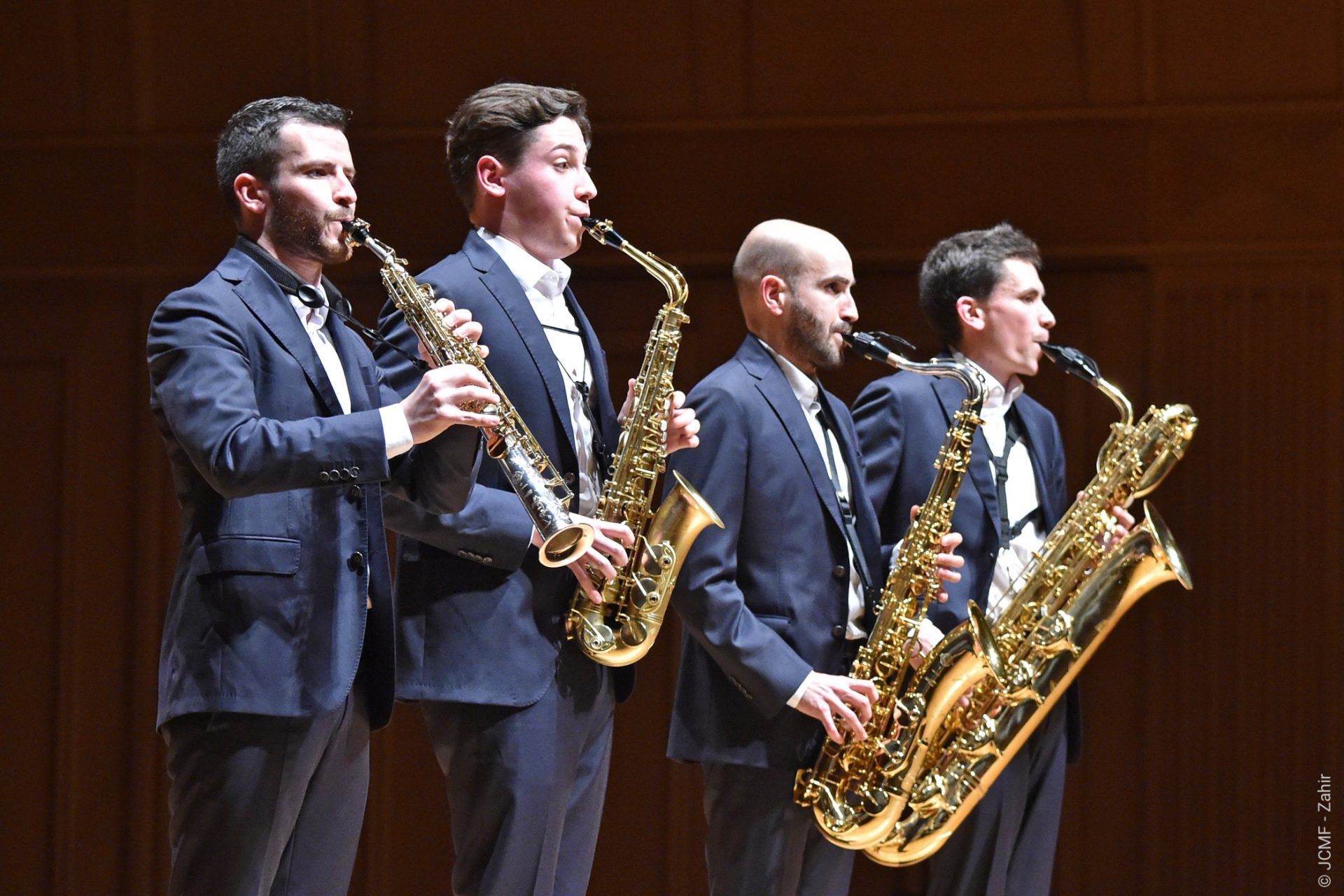 Born in 2015, this young ensemble already performs in numerous festivals in France and around the world. In 2017 the Zahir Quartet distinguishes itself by winning the 9th International Chamber Music Competition in Osaka (Japan), thus gaining recognition on the international scene. They have since been invited to the Wigmore Hall in London, the Philharmonie de Paris, the Folles Journées in Nantes, the Festival de Radio France in Montpellier, the Forest and Sully Festivals, the Acropolis in Nice and the Toppan Hall in Tokyo.

Supported by the “Mécénat Musical Société Générale” foundation and the association Jeunes Talents, the Zahir Quartet is also a prize-winner of the FNAPEC 2016 international chamber music competition and sponsored by pianist Jean-François Zygel after his appearance on France2 television show “La Boîte à Musique”.

It is indeed the sharing of the same sensitivity, an acute requirement and the desire to renew the musical landscape that unites this ensemble. Like the romantic hero of P. Coelho’s Zahir, who sets out in search of a romantic ideal, these four saxophonists are committed to the development of the quartet genre. Whether by interpreting the original repertoire, through their encounters with many composers such as Alexandros Markeas, Alexis Ciesla, and Nicolas Fox, or by collaborating with many artists : Jean-Charles Richard, Adèle Charvet, Jean-Denis Michat, Les chanteurs d’oiseaux, these musicians show their curiosity and creativity.

« This saxophone quartet sets all its competitors apart by its audacity, the freedom of gesture, a natural and supple virtuosity, its artistic line, its luminous commitments… The colour and the round and bewitching sound captivate. Superb sound complicity from beginning to end. »  Classique News

Born in the South West of France, Guillaume Berceau obtained his Master 2 at the CNSMDP in 2015, the Generative Improvisation Prize in 2016 and the Certificate of Artistic Teaching Aptitude in 2018. He has taken part in numerous Masterclasses led by the biggest names in saxophone. He has also distinguished himself at the Bellan, UFAM and Gap competitions and by obtaining the 4th prize at the prestigious Adolphe Sax international competition in Dinant in 2014. Today Guillaume teaches saxophone and improvisation at summer academies, but also at the music conservatories of Paris and Rambouillet.

Always in a search for pedagogical and artistic renewal, Guillaume regularly participates in projects with dance, film-concerts, as well as creations with contemporary composers from the IRCAM and the CNSMDP.

Born in Nice in 1996, Sandro started playing the saxophone at the age of 6 with his father. After studying at the music conservatories of Annecy and Lyon, he entered the Conservatoire National Supérieur de Musique de Paris where he is currently pursuing his training in the classes of Claude Delangle and Michel Moraguès. His distinctions include prizes at the Gap and Valenciennes competitions, as well as a semi-finalist title at the 2014 Adolphe Sax International Competition in Dinant.

This young musician plays in various formations such as the Ensemble Intercontemporain, the Orchestre National de Lyon and also gives many concerts on the French jazz scene. He has performed regularly in concert with André Manoukian and appears on his latest album.

Originally from the Toulouse region, Florent began learning the saxophone through the wind band and the quartet. He then trained with Philippe and Florence Lecocq at the CRR of Toulouse and then perfected his skills in the class of Jean-Denis Michat at the CRR of Lyon.

Holder of a Bachelor’s degree in Musicology in 2008 and the Certificate of Artistic Teaching Aptitude in 2016, he is currently a professor at the Toulon Regional Conservatory.

Since 2011, he has been involved in ” Les règles du Tango ont changé ” company where he is an improviser, in a project that mixes music(s), contemporary dance and videos. He performs regularly with the Orchestre National d’Ile-de-France and the Orchestre Symphonique de l’Opéra de Toulon. As an arranger, his taste for transcription is used within the Quatuor Zahir in a desire to extend the quartet’s repertoire.

Coming from a family of musicians, Joakim started playing saxophone in the suburbs of Lyon before joining Jean-Denis Michat’s class at the CRR of Lyon. After winning a 1st prize at the Nantes International Saxophone Competition, he was admitted in 2014 to the CNSMDP where he is currently continuing his training in the classes of Delangle (saxophone), Abromont (analysis) and Michel Moraguès (chamber music). He also teaches saxophone at the Conservatoire Municipal de Villeneuve-le-Roi.

A musician rooted in his time, Joakim has already performed in China, Japan, England, Italy, Algeria and Croatia with numerous ensembles such as the Ensemble Inter-Contemporain, the Habanera Quartet and the Zahir Quartet. Always in search of openness, Joakim is a member of the Collectif de l’Autre Moitié with whom he has already created two musical tales.

Find the Zahir Quartet on August 4 in the 2020 program of the Festival Eté Musical à Dinan.