Luca MONTEBUGNOLI, Olivier and François ROBIN meet this year to form the Trio MALO. Its very constitution defines the fraternal and friendly axis of the ensemble. 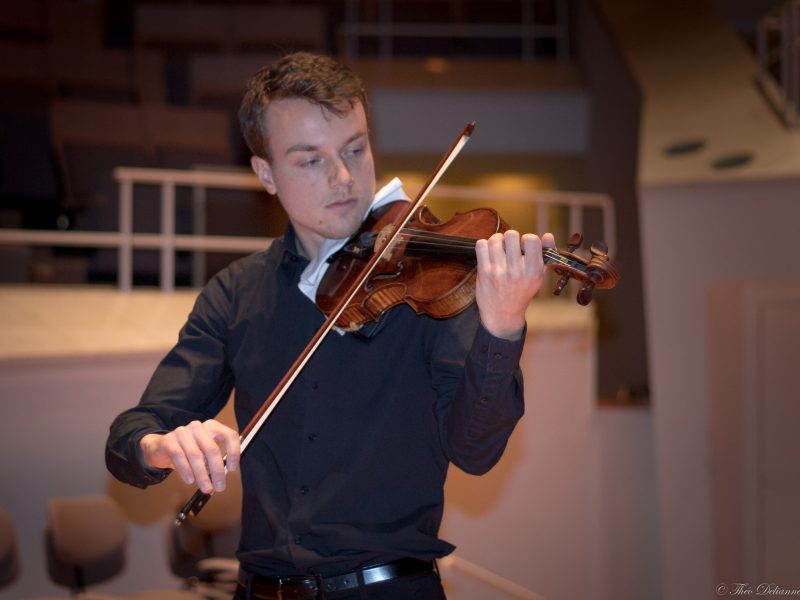 Born in 1993 in Saint-Brieuc, Olivier Robin began playing the violin at the age of four at the Dinan music school. He then entered the Conservatoire National de Région de Dijon in Anne Mercier’s class and obtained his violin and chamber music prizes with the highest distinctions.
He begins medical studies at the University of Burgundy in 2011 then ends his studies after obtaining his second year of medical studies. During these two years, he obtained a second prize in the national FLAME competition and a second prize in the international Léopold Bellan violin competition.

In 2013, Olivier decides to devote his studies entirely to music and joins the Conservatoire National Supérieur de Musique et de Danse de Lyon in Marie Charvet’s class, where he obtains his DNSPM with honours in 2016. The following year, he studies at the UDK in Berlin as an Erasmus student with Mark Gothoni and Bernhard Hartog, and joins the Karajan Academy of the Berlin Philharmonic Orchestra, where he studies with Noah Bendix-Balgley. Parallel to his orchestral academy experience, he studied for a Master’s degree in the class of Ulf Wallin at the Hochschule für Musik Hanns Eisler Berlin.
During masterclasses, Olivier met personalities such as Michael Frischenschlager, Gerhard Schulz, Liviu Prunaru, Zakhar Bron and Vadim Repin. He has the opportunity to play in many orchestras such as the French Youth Orchestra, the European Union Youth Orchestra, the Orchestra of the Academy of Lucerne, the Lyon Opera and more recently the Munich Philharmonic Orchestra and the Berlin Philharmonic Orchestra.

Passionate about chamber music, he participates in the Encuentro Santander, Zermatt Academy, and Krzyzowa Music festivals. During his studies, he worked with the Manfred, Ysaye, Debussy, Rosamonde, Danel, Artemis, and Eberhard Feltz quartets.

After graduating from the CNSMD in Lyon in Anne Gastinel’s class, François Robin  went on to perfect his skills in Paris with Christophe Coin, where he received the “Diploma as a Performing Artist” in 2014. His pronounced taste for the practice and sound of period instruments allows him to adopt a new approach to works for cello and fortepiano. He is also selected to represent the French nation in Kyoto (Japan) at the 2014 student festival.

During an Erasmus exchange in Vienna in 2011, he has the privilege to follow the teaching of Valentin Erben, cellist of the legendary Alban Berg Quartet. His passion for chamber music is confirmed. François now plays with the Van Kuijk Quartet with whom he won the 1st prize of the prestigious Wigmore Hall String Quartet Competition 2015 as well as the Haydn and Beethoven prizes.
Winner of the HSBC and then BBC New Generation Artist awards, his quartet activity gives him the opportunity to perform at the Wigmore Hall in London, the Berlin and Paris Philharmonic, Concertgebouw in Amsterdam, Carnegie Hall in New York, Sydney Opera House, Musikverein and Konzerthaus in Vienna… while following the advice of Günter Pichler, first violin of the A.Berg Quartet at the Escuela Reina Sofia in Madrid.

As a soloist, François plays concertos by Haydn, Schumann, Saint-Saëns as well as Tchaikovsky’s Rococo Variations at the Philharmonie de Paris and then for a European tour with the Besançon Philharmonic Orchestra and the Orchestre des Lauréats du Conservatoire.
His approach on period instruments also allows him to play the concertos of Carl Philippe Emanuel Bach alongside Sigiswald Kuijken.
He recorded his first CDs of works by Lucien Guérinel for Integral Classics, a trio by Philippe Leroux for the Meyer CD Foundation with accordionist Vincent Lhermet, as well as four albums dedicated to the quartets of Mozart (Diapason découverte and Choc Classica), Debussy, Ravel and Schubert “La jeune fille et la mort” published by Alpha in coproduction with the BBC and the Aix-en-Provence Festival.
François has also participated in the French Youth Orchestra and the Gustav Mahler Jugend Orchester and performs regularly with the orchestra Les Siècles conducted by François-Xavier Roth as well as with Emmanuel Krivine’s La Chambre Philharmonique on period instruments.
At the same time, he is professor of chamber music at the CRR d’Aubervilliers and artistic director of the Été Musical festival in Dinan.

Italian pianist and pianofortist, Luca Montebugnoli studied modern piano at the Conservatorio di Santa Cecilia in Rome, his hometown. He has always been fascinated by the “historically informed” approach to musical interpretation, and in 2012 he joined Patrick Cohen’s class at the CNSMD in Paris, where he obtained his Master’s degree in fortepiano. He then completes his training at the “Master of interpretation of ancient music – Fortepiano mention” of the University Paris-Sorbonne, under the direction of Edoardo Torbianelli, Piet Kujiken and Jeanne Roudet.

He is currently a doctoral research student at the Orpheus Institute of Ghent (Belgium) in Tom Beghin’s team, where he is conducting research, both artistic and musicological, on the practice of arrangement for accompanied piano in the first half of the 19th century. His research approach led him to found in 2016 the Ensemble Hexaméron, a variable-geometry ensemble which intends to explore the repertoire of chamber music with piano on period instruments between the end of the 18th and 19th centuries, in order to rediscover and make today’s audiences rediscover the richness and variety of genres and performance practices that the 20th century has forgotten.
He is also heavily involved in the field of music teaching, and is a professor of fortepiano and chamber music at the CRR in Paris and the CRD in Bobigny.

Find the Trio Malo on August 7th in the 2020 program of the Festival Eté Musical in Dinan.